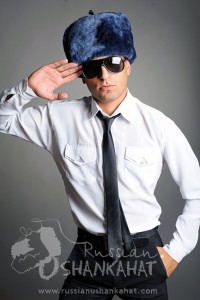 Whether you want to have a warm and comfortable hat, or you want to amaze your friend or colleague with an unordinary gift – shapka-ushanka is a really good choice. This Bomber hat is a unique creation of the humankind, as there is no other hat that would be warmer and more practical than this one. Initially designed for Soviet soldiers, ushanka can cope with any frosts and winds, as, you probably know, Russian winters are the most severe and unpredictable.
Ushanka hats (trapper hats) are usually made of leather with mouton wool (highest quality sheep wool). The name “ushanka” means that it has “ears” - a kind of earflaps, which play an important role in hat's functionality. This is due to these ears you can protect your cheeks and neck from cold wind and frost by simply tying them under the chin or on the heads back. Or just tie them at the top if they are not needed. Thanks to this feature, you can get a number of different hat styles by experimenting with earflaps positions.
The ushanka hats have a very long history. Though they are considered to be Russian hats, the similar headdress constructions were met even earlier, in China and Korea. And later, in the beginning of the XX century, they were accepted as a part of Soviet Army uniform. Their practicality is proven by time, as they are still worn by soldiers of CIS countries.
In the US ushanka hats became known only after crash of Soviet Union, when these countries became free for visiting. Now ushanka is one of the most popular and trendy accessories, and is worn both by males and females. No doubt, its comfortable construction and classical and at the same time unusual design makes her an essential attribute of wardrobe of any fashionmonger.