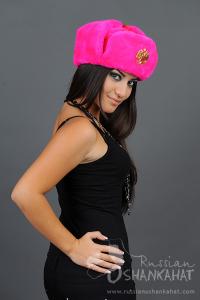 From Russia with Love – Ushanka Hats

Russian Ushanka is a cylindrical shaped round hat with earflaps. The earflaps can have ties to tie them up on the top. Russian fur hat has to be worn in a certain way. The unisex fur hat with brim covers mid-forehead. During the day or when the weather is not so cold fold the earflaps up towards the top of the hat. In extreme cold, you can easily fold down the fur hat earflaps. With the help of ties, you can secure your shapka ushanka under the chin. If you want, you can wear the earflaps at the back of your head to create another unique style.
In medieval age, men’s ushanka style was made with existing hair and skin of fox, Sibel, muskrat, rabbit fur, sheep or mink. Soviet Union army used to wear was typical grey colored ushanka made of faux fur. In the centre of the faux fur hat, they also had a badge. The red star badge was the symbol of communism and the militia wore it represent their communist country.

Shapka ushanka became favorite piece of accessories and headgear for the average Russian men, women and children. The trend of wearing Russian ushanka was not limited to the militia and many companies introduced men’s furt, ladies’ fur hat and ushanka for the babies and little children. Most of the Russian men and women used to wear faux fur hat in the winter. Mostly ushankas were custom made.

Russians have associated many tradition with fur hats. Men would keep the earflaps up to appear manlier while women wore it down for sake of not catching a cold. To the Russians it was a necessary headgear in severe winters while for the people around the world Russian fur hats became a fashion statement. From Russia to reach other parts of the world, it did not take much time. Soon the celebrities and lead characters in the Hollywood movies were spotted with black fur hat or cassock hat that matched with their attire and personalities.
Men’s fur hat and ladies’ fur hat are a common headgear in the Eastern Europe. They prefer to wear faux fur hat shapka that closely resembles the Russian Ushanka. You can see artificial fur hat craze in many parts of the United States, Canada, Germany and China. Many countries have made it mandatory for their police, army and aviation staff to wear fur hats with earflaps. Military men serving on the borders and high altitude areas prefer to wear this protective headgear while combating the extremities of nature.
You will see many Russian ushanka in numerous styles at this website. There are badges also available to help you stand apart in the crowd. The Russian fur hat or ushanka becomes a perfect gift item and souvenir. You can order as many as you desire to keep your family and yourself warm, comfortable and cozy with the help of these beautiful headgear.