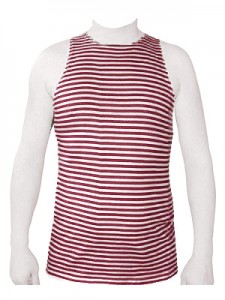 A telnyashka (Russian: Тельняшка) is a striped, sleeveless or not, undershirt worn by sailors of the Russian Navy, the Soviet and Russian Airborne Forces (the VDV), Special Forces ("Spetsnaz"), Border Guard Forces and the Russian Naval Infantry (Marines). It is a symbol of great pride for its bearers, perhaps best exemplified by the famed Soviet sniper Vassili Zaitsev. Zaitsev was a petty officer in the Soviet Pacific Fleet who volunteered for army duty in the Battle of Stalingrad, but despite transfer to the army he refused to give up his Navy telnyashka because of the pride it engendered. General Margelov who was later to modernise the Soviet airborne forces had served with a Naval Infantry unit in the Great Patriotic War and procured telnyashkas for the airborne forces as a mark of their elite status.
The official uniforms of mentioned troops include no shirts and a specially crafted jacket thus making telnyashkas a visible part of it (not just underwear).

There is a popular saying that ironically presents telnyashkas as an attribute of "real men": "Нас мало, но мы в тельняшках!" (Nas malo, no my v telnyashkakh — We are few in number, but we wear telnyashkas!).

Very stylish and comfortable stretchy knit. 100% cotton. High quality! Does not fade from wash. The cut and pattern of this shirt gives the illusion of broad shoulders and a thin waist, on both small and large bodies. Ideal Russian Souvenir - Russian Telnyashka! Ideal as an undershirt for sailors, fishermen and outdoorsmen.

If you are looking for a present for your husband, boyfriend, boss or friend - be sure, he will be excited with this unusual and exceptional gift from Russia, and will keep warm memories of you for many years.