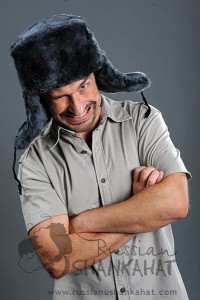 The shapka ushanka hat is an initially Russian military hat that has been created for Soviet soldiers to cope with Russian frosts and other bad weather conditions. Though ushanka is considered to be traditional Russian hat, the hats of similar design were worn in Korea, China and Eastern Europe. Also, it is highly common in Canada and Northern America, especially in regions with cold climate.
Literally the word “shapka” used for this hat in English-speaking world - is just a Russian word that means “hat”, and the word “ushanka” means “a hat with ear flaps”. This is due to its construction – the hat has two ear-flaps, which can be either tied at the crown of the hat, or tied under chin to protect chicks and ears from strong wind and frost. The hat was initially made of fur, but recent military Russian ushankas for soldiers are mostly made of artificial fur, though hats for officers are still can be made of cheap kinds of sheepskin.
In United States ushanka hats became popular not so long ago. After the fall of Soviet Union in 1991 the first wave of Soviet ushanka hat import in US started. The hat gained its popularity for her practical qualities and stylish look. Indeed, there is no better headwear for cold winter months, moreover, this hat fits to any clothes and can be a trendy and stylish accessory to any image.
Today many designers have offered to the world different modifications of ushanka hat made of various materials and of various colors. But still the most popular and a real bestseller is a classical Russian Army ushanka hat made of “tsigeyka” and with military badge on the front. So, if you want a stylish and comfortable hat, or you want to make an original present to your friend – the ushanka hat is the best ever choice!