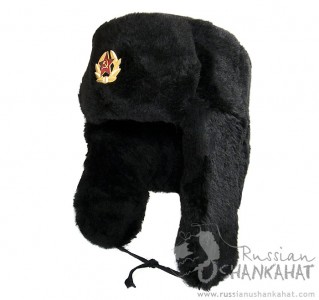 This Soviet Soldier's hat (Ushanka). Made from black faux fur, and is designed to bring you the ultimate warmth.

Faux fur hat, Ushanka is the winter cloth, fur, or a combined cap (initially for men), widely used in Russia headdress. Ushanka was called so due to the turn-down "ears" which when rose can be tied on the crown.

This trapper hat is descended from similar headdress of the nomads from the Great Steppe (including Southern Russia) and therefore is a custom headdress for this region. Caps and hats, which are the prototypes of ushanka, were used by the Scythians, and then by the Mongolian empire inhabitants, including Horde, soldiers, the Cossacks, etc. Such type of hat was very practical for a traveler or a nomad, as it can be worn in different weather conditions (strong winds, different temperatures, etc.). The "ushanka" hat's prototype was the "kolchakovka", which was widely used in the White army of Kolchak in 1918-1919. After that the fashion on fur hats with a round crown was spread among the St. Petersburg workers, then across the entire Russia, and eventually, all over the world.

Men's fur hats in the last decade have undergone some positive changes. They are lighter, more comfortable, more varied. Men's ushanka hats are not only necessary subject in the male wardrobe, but also an expression of man's personality. Headdress says about a man more than other articles of clothing, a hat forms an external image of men, often emphasizes his social status.

Today there is a great choice of different variations of ushanka hats. They are produced in all colors and styles. The most popular in this category are fur ushanka hats made of mouton fur, sheepskin fur, rabbit fur, fox fur, faux fur. Ushanka hat is not only a comfortable and practical headdress, but also a stylish element of your image.