Hat with ear-flaps - Ushanka (during the Civil War as a cap-"kolchakovka") - winter fur, cloth, or a combination cap (initially - male), widespread headdress in Russia. Ushanka got its name because of the turned-down "ears" in the form of a raised related to the crown.

Earflaps worn in the folded position, that is, with tied at the top "ears", but if necessary, "ears" go down with the lapel at the back to protect from cold wind and ears, and partly cheeks and chin of the person wearing fur hat. "Ears" as it is possible to tie at the back.
The appearance, history and fashion
Hat with ear-flaps has its origin from similar headgear of the Great Steppe nomads (including Southern Russia), and thus is a traditional headdress for the region. Hats, caps, transformed ushankas used Scythians, then the inhabitants of the Mongolian empire, including soldiers, Horde, then the Cossacks, etc. This type of cap was very convenient for the nomad or traveler, since you can wear it in a variety of climatic conditions (differences temperatures, strong winds, etc.). The prototype of "hats with earflaps is the" cap-kolchakovka ", which is widespread in the White Kolchak's army in 1918-1919. [1] Later the fashion for fur cap with a round crown is distributed among the workers of St. Petersburg and then across Russia.

Earflaps in the army

Earflaps in the service of Kolchak

The first headgear, similar in appearance with a hat with ear-flaps, have begun to use the army of Kolchak. Since the summer of 1919 receives widespread "old" version of the cap Nansen. From the classical version of it differs in that, on the one hand, it was completely made of cloth (that is, its nazatylnik with ears and the front valve is not sheathed with fur), and, on the other hand, apart from the vertical front valve, it was still peak (at also appears to be wrapped in cloth).

By the autumn of 1919 "kolchakovka" gets in the army of Admiral Kolchak's very widespread. It does not displace all hats and caps, but many of the photos you can see the white men in caps and mixed in such caps. Fotosvidetelstva also provide an opportunity to make sure that certain parts of Kolchak's army were supplied exclusively by this new version of the headgear.

In this case, a visible feature. The officers on the vertical front valve cap badge attached standard (which is sometimes replaced sewn diagonally white and green "anthrax" ribbon), while for ordinary soldiers badge simply not available. According to researcher Kolchak uniformologii Petrova, this could be due to the lack of cap badges, as well as the fact that the very unusual form of headgear is the hallmark of it is white men

Ushankas in the Soviet army and police

From 1931 to supply the Red Army was the so-called cap-Fink, in general, like a hat with earflaps.

In 1934 to supply the Navy adopted the Red Army hat with ear-flaps black in color. Hat with ear-flaps comprises about, a black cloth cap, visor and nazatylnika with headphones. Headphones in the lowered position fastened to ribbons, and tucked inside raised nazatylnika.

In accordance with the order of the People's Commissar of the Navy № 426 of 20 October 1939 cloth cap is replaced on the skin of black Shevret in the center of the top adds leather-covered decorative buttons. Caps for top and senior commanders used fur lambskin black, and mid-caps for commanders and enlistees - beaver lamb fur is black.

Since 1940, a cap with ear-flaps had been introduced as a winter hat shaped the army and police in the USSR. Along with a cap with ear-flaps on the supply of Voodo steel helmet (helmet) NL-40, adjusted for winter wear top hats with earflaps. Initially, these caps were made of fur boots bright colors, and then they began to make gray. In the Navy, they were also introduced, but black. During World War II were made en masse, including faux fur, which was explained by the need to meet the needs of the army.

Generals and colonels in the form of clothing, caps, instead ushankas, are astrakhan hats, and their peers soldiers of the Navy - a black Persian lamb hat with a visor.

In the western world ushanka is part of the stereotypical "image of Russian" (for example, in a Hollywood film, in caricatures, etc.), in English called simply chapka. Similar caps distributed not only in the former Soviet Union, but also in several other countries such as China, North Korea, Mongolia, are also present on the works of late medieval European painting, particularly the Northern Renaissance. Ushankas are often also in Canada, where it acts as an element of the winter uniforms of some armed groups. A similar cap (but without the long ears and a button on top) is common in Finland.

An Ushanka is a traditional, yet stylish, Russian winter hat, which is extremely warm to handle the frigid Russian winters. It has ear flaps, which can be folded up and tied at the top of the hat, or tied at the chin. Wearing ear flaps down protects ears, bottom of the chin, nape and top of the back of the neck from the cold. The word ushanka translates from Russian as "with ears". Ushi means ears in Russian language.

Ushankas worn by the Russian and former Soviet soldiers were often made from artificial fur. However officiers' Ushankas are made from mouton or sheepskin. Ushanka hats are also manufactured from many other types of fur, such as rabbit, arctic fox, mink and muskrat furs.

An Ushanka Russian hat will keep you cozy and comfortable all winter long while keeping you fashionable. It features the classic Russian hat style. Just tie the warm ear flaps beneath the chin, on top of the crown of your head, or at the back, this will give you three different styles or looks.

Ushanka
An ushanka (Literally "ear hat") (Russian: уша́нка; pronounced [uˈʂankə]) is a Russian fur cap with ear flaps that can be tied up to the crown of the cap, or tied at the chin to protect the ears, jaw and lower chin from the cold. The thick dense fur also offers some protection against blunt impacts to the head. While no match for a helmet, it offers protection far superior to that of a typical beanie cap should the wearer fall and hit his or her head against ice or packed snow.

The word Ushanka derives from ushi (у́ши), "ears" in Russian.

Historical use
Hats with flexible earflaps made out of fur have been known in Russia, Germany and Scandinavia for centuries. Such hats also were used by ancient Scythians and various nomads of the Central Asia, as well as by the peoples living in the Arctic region.

However, the standard modern-type ushanka with a perfectly round hat crown was developed and became massively used only in the 20th century, in Russia.

During the Russian Civil War, when Aleksandr Kolchak ruled in Siberia, c. 1918 he introduced a winter uniform hat, commonly referred to as kolchakovka, which was basically an ushanka with an extra eye-flap. However, Kolchak and the White Army lost the Russian Civil War, and initially the ushanka didn't find much usage in the newly founded Soviet Union.

During the Winter War with Finland 1939 thousands of Russians died of cold due to organizational failures and inadequate equipment. Reforms were undertaken and the Red Army introduced a new winter uniform, which included ushankas to replace budyonovkas. German soldiers started to use this and other gear unofficially, though copies were introduced rather late in the war.

Current use
Although identified with Russians, it is also a part of winter uniforms for military and police in other cold climates, such as Finland or Canada. Gray (military), green (for camouflage) and blue (police) versions are used.

Stereotype
Though ushankas are a distinctly Russian hat (indeed, the stereotypical Russian is seen to wear one) the wearing of fur caps of similar design was relatively common throughout China, North Korea, Eastern Europe.

The Ushanka became a symbol and media icon of Soviet Russia. Photographs of US President Gerald Ford wearing the cap during a 1974 visit to the Soviet Union were seen as a possible sign of Détente. In 1991, with the fall of the Soviet Union came the first wave of commercially imported Russian winter hats into the United States. The Ushanka hat has now made its way to the United States and is a very popular hat.

Ushanka is Unisex. It can be a great gift for everybody: fir him or her, men and ladies, husband or wife, boyfirend or girlfriend, grandmother or grandfather.

All ushankas can be worn in different ways: 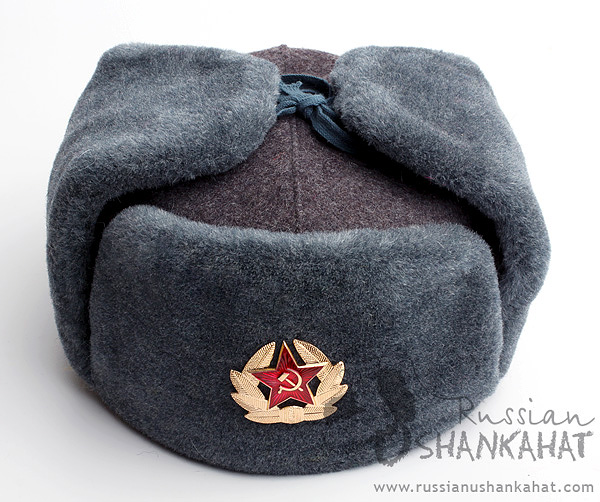 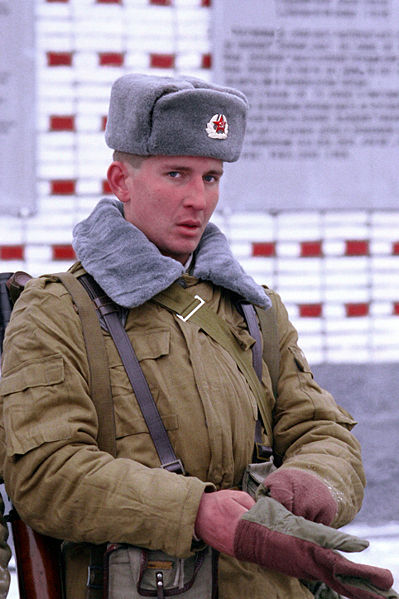 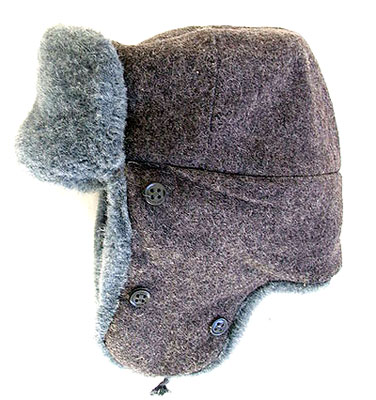 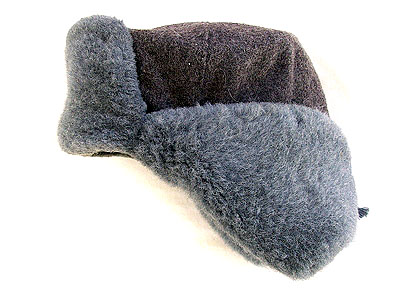 Ushanka with ears folded back. 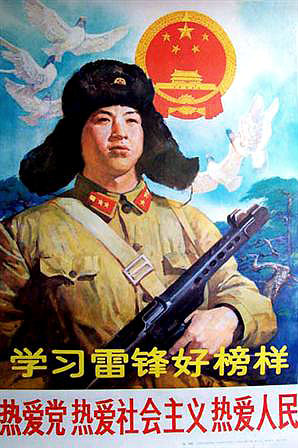 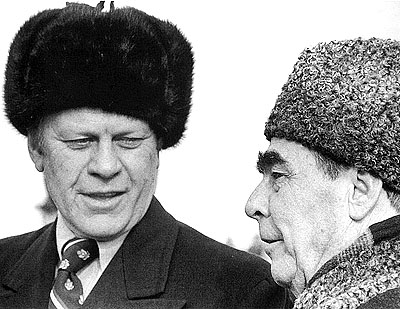 Gerald Ford wearing an ushanka and Leonid Brezhnev, 1974 in Vladivostok.